The daily Ring of Kerry Tour and Dingle Tour both depart from our office at 22 Main Street in the centre of Killarney town at 10:30 am. The coach will return to Killarney between 5:00 pm and 5:30 pm. 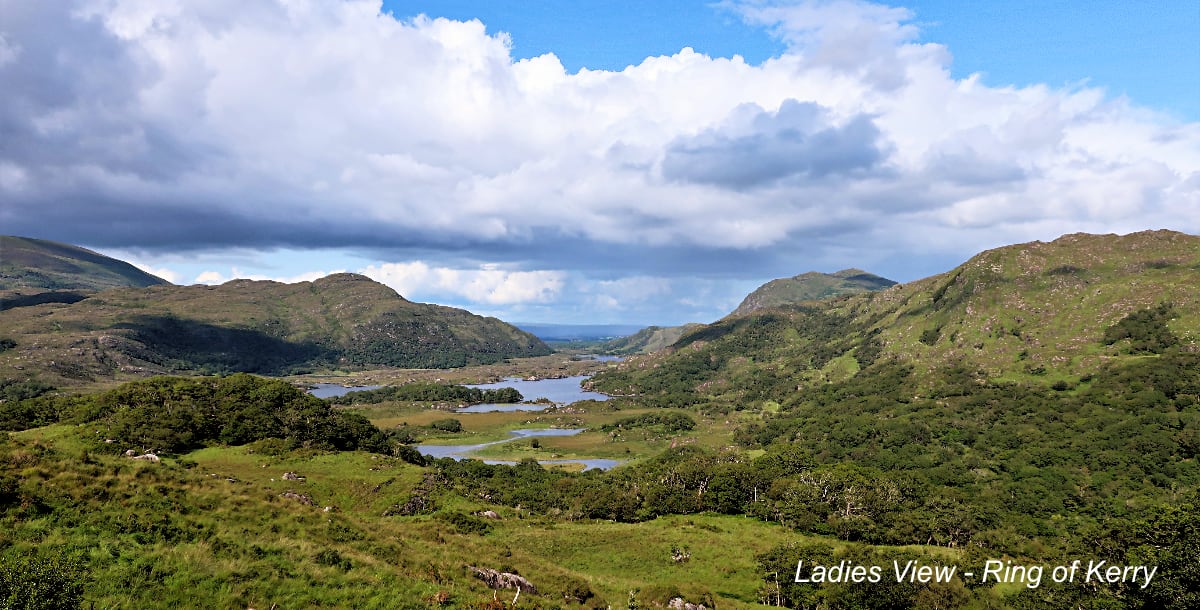 Ring of Kerry Tour - The Route

The Ring of Kerry Tour follows the small highway that skirts the Iveragh Peninsula and for the most part, follows the route of the Wild Atlantic Way. It is undoubtedly Ireland’s most popular scenic drive. Iveragh, the more southerly of Kerry’s two great peninsulas, is a natural wonderland of forest, blanket bog, river, lake, sandy beach and mountains, including Ireland’s highest peak Carrauntoohil (Irish: Corrán Tuathail). Lapped by the warm Gulf Stream, it enjoys exceptionally mild winters and is home to sub-tropical vegetation.

The first town on the route is Killorglin, home to the famous Puck Fair festival held on the 10th, 11th and 12th of August every year. Residents capture a wild goat in the mountains, and the "Queen of Puck", traditionally a young schoolgirl from a local primary schools, crowns the goat "King Puck." For three days of the festival, the goat acts as the King.

The first stop will be at The Bog Village. This little cluster of thatched-roof cottages demonstrates what rural life was like in Kerry in the 1800s. The museum village (an optional feature with an additional small charge) has a replica blacksmith's forge +house, turf cutter's house, labourer's cottage, thatcher's dwelling, and tradesman's house. See the stacks of turf piled high by the road. There is also an old Irish pub named The Red Fox Inn, where you may enjoy an early drink or tea/coffee and scones.

After departing the Bog Village, we will continue through the village of Glenbeigh with a view of the beautiful Rossbeigh Beach and a fantastic view of the hills at the back of the Iveragh Peninsula. Generally, from March to October (Seasonal only), we stop with Brendan Ferris at the Sheepdog Show at Kells on the Ring of Kerry. If how they train sheepdogs is a mystery to you, then a trip to Kells Sheep Centre is a must. Run by sheepdog trainer Brendan Ferris, the Kells Sheep Centre is located on the Ring of Kerry on the N70, halfway between Cahersiveen and Glenbeigh. Watching Brendan's exceptional skills in action with his Border Collies is a real treat as they respond to his every command. It takes Brendan between one to two years to fully train these dogs, and they go on to work for eight to nine years. Brendan always has three dogs trained and two learning at all times. Visitors can watch demonstrations of sheep dogs rounding up sheep.

Depending on the day, there will be a lunch stop in either Cahersiveen town, The Scarriff Inn or Waterville. If lunch is in Waterville, we will pass through Cahersiveen. On the eastern side of Cahersiveen is the birthplace of Daniel O'Connell (1775-1847), also known as "The Liberator" and widely recognised as Ireland's greatest-ever politician.

Then, continuing into Waterville (An CoireÁn) "The Little Whirlpool" - The premier coastal tourist centre, with blue flag beaches between Lough Currane and Ballinskelligs Bay. The town has two magnificent links golf courses. Steeped in history, Waterville has many archaeological monuments in the locality. For years it was a favourite retreat of CharlieChaplin, and on the promenade, you can find a life-size statue of the great comic actor.

The tour continues through the area of Derrynane, a rocky cove notorious as a port of call for smugglers in the 18th century. It is the former seat of the O'Connell clan and home to "The Liberator", Daniel O'Connell.

The next stop is the small village of Sneem – perhaps Ireland's most colourful village. Its two squares straddle the estuary of the River Sneem, with a quaint Italianate church(1865) and chequered houses. An untypical village laid out in an English style around a village green beneath a semi-circle of low mountains. Sneem was gifted a panda sculpture by the People's Republic of China and a goddess Isis sculpture by Egypt. Sneem marks the start of the most sheltered part of the Ring of Kerry's coast. You will see lush, subtropical growth – wild rhododendrons and azaleas, evidence of the unique effect of the Gulf Stream.

Leaving Sneem, we travel through the rugged landscape and arrive at Moll's Gap, where the viewing point at the Gap offers sweeping views of MacGillycuddy's Reeks. Continuing from Moll's Gap to Killarney, we experience far-reaching views over the broad valley of the Killarney Lakes and "Ladies View". So named, after Queen Victoria’s ladies-in-waiting visited here during the royal visit in 1861. They were so taken with the view that it was named after them.

Finally, the coach will pass through the Muckross Estate and onwards towards Killarney arriving between 5:00 pm and 5:30 pm.